Last year Margaret pledged to stop having sugar in her hot drinks. The good news is that she stuck to it and is still not having sugar.

That’s incredible! Margaret says she feels much better and now just has to succeed with the walking plan! Watch this space!

We are busy hard working parents with full time jobs, this can often make quality family time difficult to come by. In 2015, we decided as a family to sign up to Health pledge. This meant we would commit to going swimming on a regular basis, which we & the children love. it's good for our health, it's fun and importantly we get quality family time with each other. In our family, making a pledge means making a commitment & trying very hard to stick with that, even when we don't always feel like it! So a big Thankyou to the team at Health pledge from whom we have definitely made a splash!.. & other families should sign up too! 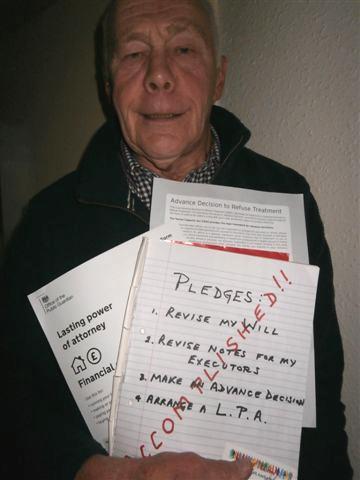 John lives on his own and has no close relatives. He does however have lots of friends. He is in his early seventies but very active, walking, cycling, swimming and playing golf. He still travels extensively and is healthy. One of his worries for some time has been that were he to become ill there is nobody who would have the authority to manage his affairs both financially and in terms of health decisions. It’s something that he has been meaning to “get around to” for ages.

We talked about doing a Health Pledge to help his resolve with a target completion date.

He has now contacted us to say he has made a will.

He has also organised power of attorney for his financial matters and made an advanced decision document  how he wants his life or death treated if he becomes incapable of making  decisions for himself.

He says that it is a big weight off his mind and he feels safer and more relaxed.

He’s proudly sent a picture with “Accomplished!” across the front of all his documents!

What’s your next pledge?

She has succeeded and the exercise has enabled her to hit her target weight for the first time in years. She said that making it a  pledge has made all the difference and she is going to keep it up as she feels great and is delighted with her progress.

A year after making a Health Pledge not to use the lifts in our new campus I am pleased to report the stairs have never looked so good! 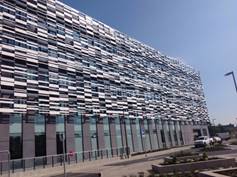 I work in an office on the fourth floor of our new building and we have glass lifts. I hate lifts and when we moved in I vowed I would not use them. This was a challenge to start with as the climb up the stairs left me breathless and unable to speak. I have a long-term heart condition so am regularly breathless but this increase in exercise took some adjustment. I am now happy to report the amount of times I go up and down the stairs in a day has increased and I am now able to do it whilst maintaining a conversation. My approach has also had a positive impact on some of my colleagues as if they walk in or out of the building with me they have to use the stairs too! I have also lost weight so it has been a positive step to change my health.

Keeping to the no biscuits for Lent pledge and and walking for the paper. I have now joined a tap dancing class for adults, 55 years since I last tap danced it is great fun, I have been invaded by an elephant which has claimed my feet but I am loving it! Pilates and Tai chi next, watch this space!!!

I'm still going to the  choir and enjoying it. We are learning some new songs to celebrate that Frank Sinatra would have been 100 this year & Elvis 80!!
We have to wear pink next week as we are being filmed. I can't remember what for but you should see me in my pink glitter wig....
I'm doing my stretching exercises & concentrating on my neck which is my worst bit!
I'm going to hydrotherapy next week when my cold has gone.
Onwards & upwards.

Update for Margaret Meredith........Margaret says she is still determined to do her pledges

Sometimes on a Sunday she has sugar in her tea but not the rest of the time
She doesn't always manage all the walking every week but is keeping going. She says it will be easier when the weather is better

Pledged to keep on with their regime. It's certainly working!
They are both 80. They still crew their 27ft boat on their own! They walk at least a mile a day or cycle further, often to the library. They cook from scratch and eat lots of fruit & vegetables. They are keen readers and enjoy puzzles. They move house about every 6 yrs as Joe says it stops them from getting stale and when they move there's always something that needs doing! Joe has a beer most days but Joyce doesn't drink alcohol. They laugh a lot too...........

Is still doing the Park run twice a month

One of my pledges is to do four exercise sessions each week. I’m starting that in January as my hip replacement will be more stable.
However, I have joined the choir, Tameside Voices, as pledged.
I’ve been to three rehearsals and also to the four “gigs” we’ve had to raise money for good causes. The gig at Asda in Ashton was hilarious. We were singing in the café & nobody had told the man on the tannoy that we were singing, so it went something like this….
“Silent Night, Holy Night (crackle crackle) Mince pies, buy one get one free, not worth making at that price…….All is calm, all is bright!”
I am absolutely loving it & getting an enormous amount out of it both physically & mentally. I’ve met some great new people and can’t wait to start again in January. Watch this space……Have you pledged yet?

I’m doing very well with my two pledges. I’ve not had any crisps and I’ve been keeping up with my sessions on the treadmill even though it’s hard to fit in when we are so very, very busy…… I’ve also been encouraging patients to consider a health pledge to help them to make a positive change.

One of my pledges was to cut out sugar in my hot drinks. I must admit that I’ve cheated a couple of times when I haven’t felt so good but I haven’t given in. I’ve just thought “Ok that wasn’t great but from now keep working at it”.
I also pledged to walk a mile five times a week. I’ve done ok with the walking. I’ve not done it 5 times a week but sometimes when I’ve been out I’ve done double. Sometimes the weather has been too cold & I can’t get my breath properly when it’s too cold so I do less then & more when it’s warmer. I’m definitely carrying on & my doctor will be very chuffed!